Where do you find the best burger in Copenhagen?

That’s a tough question to answer, since it’s all up to one’s individual taste, but I can tell you which I prefer, plus some other crowd favourites.

Here are my TOP 5 in ranking order.

This burger joint ranks as number one on numerous best-burger-lists. And it’s no coincidence. Their no-bull burgers are just of really top-notch quality. Everything is organic, from the bun, the meat to the salad and the meat is grinded at location every morning, for a completely fresh, hand formed patty.

They only have 4 burgers to choose from, where one is vegetarian and the price is very competitive. 75DKK for the burger, 20DKK if you want fries and if you want to add a beverage, you can have the burger/fries/soda-combo for 100DKK.

In 2016 the first Gasoline Grill opened on Landgreven 10, in what was once used as a gas station, hence the name. You can still pump your gas, just outside Gasoline Grill, but the actual building, where you used to pay for the gas, now contains the small kitchen, where they hand out burgers through the hatch on the side.

Only a year after opening, Gasoline took Copenhagen by storm, when they appeared on Bloomberg’s list of the 27 best burgers in the world. People stood in line to taste their juicy burgers and here years later, you can still expect to stand in line, at some parts of the day. They also won the price as the Best Burger in Town for both 2018 and 2019 by a Danish newspaper.

They have seen so much success, that they have opened a whole chain of burger joints and are now spread all-over Copenhagen at 6 locations. I have only ever been to the original location at Landgreven, so I don’t know about the other places, but at Landgreven there are only a few benches outside, for you to sit on.

Like at Gasoline, it’s no BS burgers. Simple composition, but great taste. And at Tommi’s they also offer their burgers at very fair prices. 69DKK for a regular, 25DKK for a small fries and the soda combo is 99DKK. There is one option on the menu for vegetarians.

They seat around 20 people indoors and plenty outside, should the weather be nice and they also serve some lovely beer on tap, to go with your burger.

Now it’s time for some of those experimental burgers. At Cock’s & Cows, which opened the first restaurant in 2010, they of course have a regular burger, but most of the others on the menu are a bit out of the ordinary.

Like the Onion Johnny, with onion rings, chili onions and béarnaise or the Zé Brazil, with a chili-grilled beef patty, fried breaded buffalo mozzarella and chili mayo. Not quite an average burger. There’s an ovo/lacto and a vegan choice of burgers on the menu.

A part from the regular burger (89DKK), their prices are between 109DKK-139DKK, not including fries or beverage, so it’s another price-range, than at Tommi’s and Gasoline.

C&C has won the prize for Best Burger in Town for 4 years (2012, 2014, 2015 + 2016), given by a Danish newspaper. Obviously, they had huge success in those years, since they were the talk of the town regarding burgers, but they still maintain a high level of quality to this day. All that success resulted in C&C having spread out in 10 locations in Denmark, with 8 of them in Copenhagen.

The first part of the brand name, is short for cocktails. When evening turns into night, the restaurant becomes a cocktail bar, but you can of course order cocktails before that. They take a serious approach to the bar scene at C&C, which is why their cocktail menu has been created in close collaboration with Rasmus Shepherd-Lomborg, who is the guy behind the very hip bar Ruby’s.

If you’re looking to grab a good burger at the airport, you would like to know, that C&C also have a restaurant there near the A-gates.

Here’s another former winner of the award for Best Burger in Town, back in 2013. Halifax has been around for quite a while, since 2007, and they were one of the very first in Denmark producing gourmet burgers.

The owners and founders Ulrich and Peter opened the first restaurant on Nørrebro, where they strived to serve high quality burgers. Things took off and today 12 restaurants in Denmark, 7 of those in Copenhagen, carry the name Halifax Burgers, which came from the place the two guys met – Halifax in Canada.

All the burgers are named after certain places in the world, which has inspired Ulrich and Peter in some way or another, during the creation.

The burger København (Copenhagen) was on the menu from day one. Liverpool is with a fried egg and bacon a homage to the well-known British breakfast, while Kreta (Crete) is filled with tzatziki and feta cheese. All burgers on the menu are available with a vegetarian patty, made of either beetroot, peas or potato rösti.

The burgers are large and few people will leave the restaurant anything but full. Pricewise, Halifax is a bit more expensive, with burgers averaging a price of 110-115DKK, not including fries or beverage, but those burgers are large, so the price is quite fair.

Here’s a place I liked, from the first time I went there. I had never tried or even heard of a slider burger before, but I instantly fell in love. A slider is generally speaking just a small burger. If the burger is small, you can eat more burgers – simple math… or something like that.

At Sliders, they have around 10 different burgers to choose from and you can of course decide to stick with one, but normally you would go for their meal deal and order three, with fries and dippings. And that’s what I like about Sliders, you get to try three different burgers, all in one sitting.

Apart from being nominated numerous times, Sliders has also won the award for Best Burger in Town in 2017. And if you go there, you will know why. They know how to compose a burger and they are not afraid to experiment with some components, that you don’t see in a regular burger.

They have the Ugly Duckling with duck and chicken breast, sweet chili and hoisin sauce and crunchy sugar snaps, spring onion and peanuts. It’s so good! Or the Triple Truffle Cheese – 3 types of cheese and 3 types of fried mushrooms with truffle mayo on top. Yum!

One slider is 45DKK, while the meal deal is 129DKK, which is good value for money in my opinion. Several of their burgers are offered with a vegetarian patty.

Those were my TOP 5 favorite burger joints in Copenhagen. Here are some other crowd favorites, that probably won’t disappoint you either.

Sporvejen is decorated on the inside, to look like an old tram or cable car. And their burgers are also pretty old-school. They actually look a bit like the ones you would make at home, with potato wedges on the side and everything.

They do get very good reviews and is a good option for a budget lunch. If you order before 5PM their burgers cost between 59DKK-79DKK, where potato wedges on the side are extras. After 5PM, they are 85DKK-105DKK and now including wedges.

On the very popular street Elmegade, Banana Joe hands out burgers for hungry customers. Staying below the radar with no website, not much info can be found on this small burger joint. Apparently, Joe owns the place and he’s the only employee. According to the reviews he’s the best host you can get and the burgers should be simple and really tasty. Sounds like a must try someday!

This one is also on my burger radar and has been for a while – I just haven’t come around to trying it yet. Rasmus Oubæk is the guy behind this burger chain and when he puts his time and energy into something, it’s often turns out as a success.

He’s actually known in Denmark as “the king of béarnaise”, since he was part of a movement, to get Danes to enjoy the real sauce béarnaise, with plenty of butter, and not the one most Danes make at home, that is made by adding milk to a sachet of powder.

Nowadays, he’s behind successful restaurants like Pluto and Gorilla, and since 2016 also the chain Jagger. There are now 6 “Jaggers” in Copenhagen and they focus a lot on good produce and keep on wanting to perfect their products.

You think we missed an obvious one, that should be on the list? Let us know in the comments.

link to Public drinking in Copenhagen

Have you ever tried traveling to a new city and after arriving at your hotel, you want to go shopping, but you find out that all the shops are closed, due to some local holiday you've never heard of... 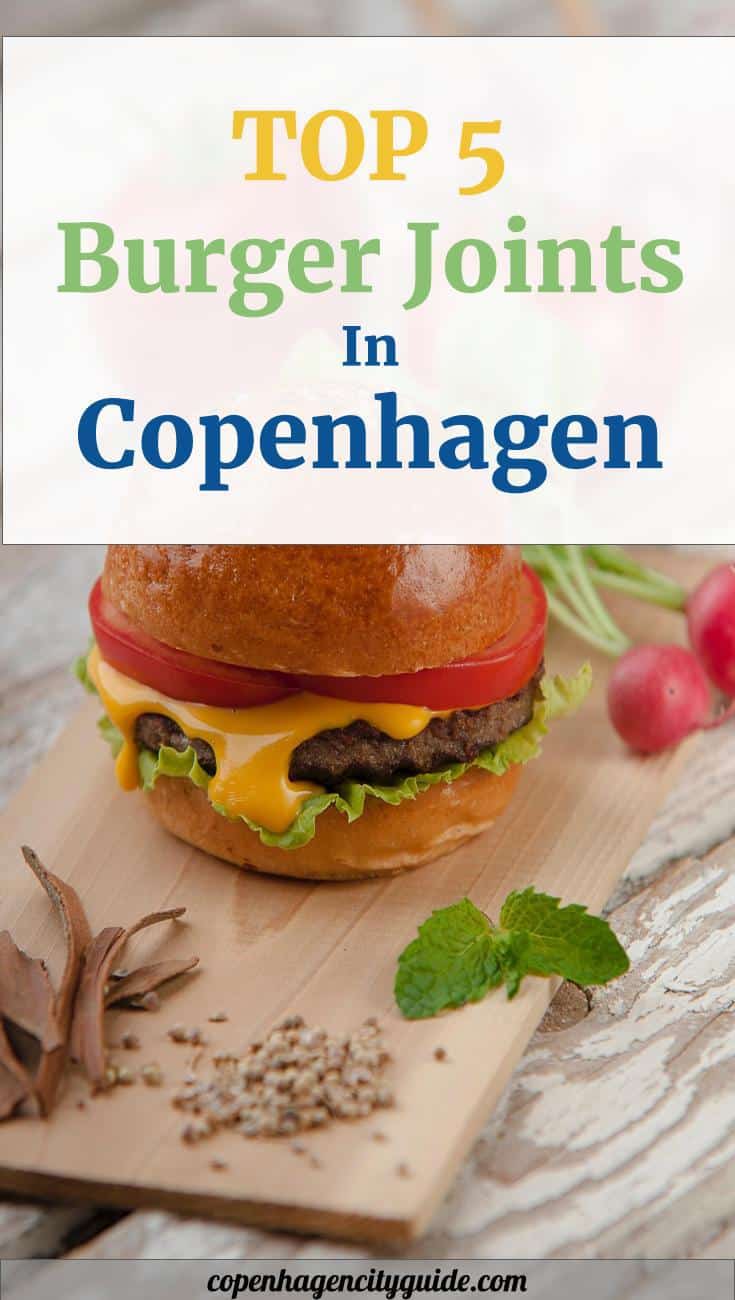